Use of surveillance and social media in Liability claims

On 1 August 2016 the Australian Broadcasting Commission (ABC) aired in its television show 4Corners "Insult to Injury". The episode interviewed police officers from three different states who had lodged insurance claims for total and permanent disability benefits on the basis that they suffered from post traumatic stress disorder. The police officers claimed that investigators retained by their insurer carried out video surveillance of them, and monitored and collected data from their social media pages. They claimed that those investigation methods exacerbated their mental condition.

The 4Corners episode was strictly about claims for benefits brought by insureds under their life insurance policies. It does however raise the need to review the use of surveillance generally in liability claims. In this article we focus on the use of optical surveillance and social media by investigators to gather evidence about third party claimants and plaintiffs in so far as they arise in the Commonwealth, New South Wales and Victorian jurisdictions.

We have set out below the circumstances in which optical surveillance of third party claimants by investigators is permissible (or not) under the NSW and VIC Acts: 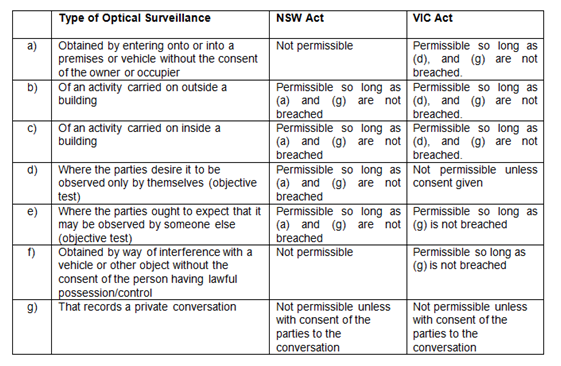 As set out in the table above, both jurisdictions prohibit the recording of private conversations without the consent of the parties involved.2 In our opinion this would capture optical surveillance with sound recording which records a private conversation. Essentially, if a claimant or plaintiff is having a private conversation in circumstances where it could be reasonably taken that they did not want anyone else to overhear it (and it was reasonable for them to have that expectation), then it is an offence to record it with a listening device.

In addition to the restrictions set out by the NSW and VIC Acts, it goes without saying that optical surveillance should not be obtained using conduct which would in itself be a criminal or civil wrong such as trespass, conversation, assault, or public/private nuisance.

A common personal injury claims investigation tool for investigators, lawyers, and claims handlers alike is to view plaintiffs or claimants' social media pages such as Facebook and Twitter for evidence of whether they have overstated their injury and/or disabilities.

So long as the information gathered from social media pages is "open" information that is publicly available (ie information to which access is not restricted by a password), such tactics are generally legal. It is however a criminal offence under s 308H of the Crimes Act (NSW) and Div 478 of the Schedule to the Criminal Code Act 1995 (Cth) to knowingly gain unauthorised access (aka "hacking") to data held in a computer which is restricted (ie password protected).

The use of optical surveillance and social media by investigators to gather evidence about third party claimants and plaintiffs is generally permissible if the restrictions set out above are followed. Overall, so long as the optical surveillance carried out in NSW is obtained without trespass, conversion or the recording of private conversations, it is permissible. In relation to optical surveillance carried out in Victoria, it must not be of private activities (including conversations) without the consent of the parties being observed. The use of social media is generally permissible so long as the information is publicly available (ie not password protected).